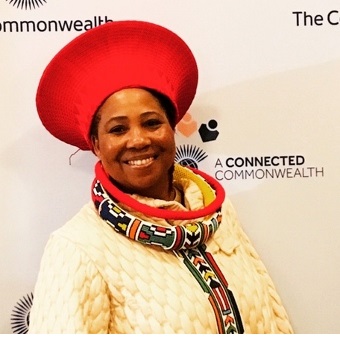 Zimbabwean nurse Dorcas Gwata is a wonderful example of how much a nurse can contribute to making the world a better place by building bridges between different realities.

Dorcas is a Public Health Specialist with Central and Northwest London NHS Trust and works in the Westminster Council Multi-agency Integrated Gangs Unit (IGU), providing physical and mental health support to young people and their families who are affected by the gang culture. While working with young people in schools and youth centres with the aim of ‘Keeping young people on the right track’, she dedicates precious time to any number of global health platforms.

Dorcas is co-founder of the Global Health Café, which stimulates reflection through dialogue and addresses important health issues of relevance to Africa, such as innovation, health policy and practice that support Health Systems. Dorcas works as a volunteer with AFRUCA (Africans United Against Child Abuse), a charity set up in the wake of the murder of eight-year old Victoria Climbié in London in 2000. She is a strong advocate on safeguarding issues for African children across communities affected by female genital mutilation, human trafficking, modern slavery and witchcraft branding.

During the Ebola crisis in West Africa in 2014 Dorcas was also invited by the WHO to join the group ‘Better Health for Africa’ – a small group of African Diaspora Healthcare professionals – to contribute on public health issues in Africa. Recently, Dorcas spent some time at the World Health Organisation in Geneva, shadowing WHO Chief Nurse, Elizabeth Iro, where she pushed the need for more women in leadership roles and for mental health to be a priority at all levels, including in the health of health care workers.

Dorcas further collaborations in Africa include a scoping visit in Tanzania to evaluate professional development needs for nurses and to develop a Buddy project (Professional – Friendship Bench Project) by meeting key staff and through clinical participation and observation. In In 2018 she was appointed Chair of the Zimbabwe Health Training Support Charity, a diaspora-led charity focusing on mental health and epilepsy training in Zimbabwe. In 2014 Dorcas was given a prestigious Florence Nightingale Travel Scholarship that she used to undertake research in Zimbabwe. The study involved her in a community based HIV programme using a culturally adjusted model of care that had been seen to improve patients’ adherence to HIV treatment, as well as mental health outcomes.

Her ability to live in and for different cultural realities allows Dorcas to import new innovative knowledge also in the UK were mental and physical health issues display similar challenges such as economic constraints and vulnerable population. For example, she used her learnings to inform her work with young people and families involved in gangs in London and in 2017 she was the face on the advertising posters for the UK National HIV Testing week.

Dorcas’s personal history can represent a genuine source for inspiration to all nurses and to those who wish to become a nurse. Dorcas migrated to the UK from Zimbabwe in 1991, first working as a cleaner then as a care assistant in the Royal Hospital in Edinburgh.  Following nurse training at the City University School of Nursing and Midwifery, Hammersmith, Dorcas worked in Hackney and then for many years in the Accident and Emergency Department at St Mary’s, Paddington.  She studied Public Health and Gender Violence at the London School of Hygiene and Tropical Medicine and has a special interest in gang culture, mental health, gender violence and HIV.  She is now a visiting Global Mental Health Lecturer at LSHTM and King’s College.

Her supporters describe her as a ‘champion in promoting rights to health’. Dorcas is a tireless and tenacious caring advocate for global healthcare accessibility with particular attention to the most vulnerable part of the society. Her enthusiasm, her energy, her intellectual brightness and her open mindedness allow Dorcas to passionately work between different cultures and needs, which display similar common denominator they are: care and vulnerability.

Just two days to go until the third #GoingGlobal of 2021! Free to attend & delivered in partnership with… https://t.co/wyTAFDFQ0O