To mark the anniversary of Myanmar’s military coup, we hear from Christina Wille, Director of Insecurity Insight, on why health workers are playing such a large role in opposition to the military, the role of solidarity in crisis, and what more needs to be done to ensure peace returns to the country.

1. Insecurity Insight examines the threats facing people living and working in dangerous environments. What have your analyses revealed since the coup took place?

The risk of violence and obstruction against healthcare workers has escalated significantly since the coup in February 2021. Health workers providing emergency medical assistance have been attacked and obstructed while trying to help injured protesters. We have also seen reports of raids and occupations of health facilities, including artillery and arson attacks, and government forces shooting at ambulances and health workers, even cases of executions at close-range and arrests of patients from within health facilities. Between February 2021 and January 2022, there were at least 415 reported incidents, with at least 286 health workers arrested, and 30 killed. This represents a significant increase since before the coup. A report from the Safeguarding Health in Conflict Coalition (SHCC) identified 17 incidents of violence or obstruction against healthcare in Myanmar in 2020.

This harassment slowed during the period from June to September, during the third wave of the Covid-19 pandemic, but the government placed strict restrictions on the provision of healthcare directing scarce resources towards their own supporters. Healthcare workers were arrested for providing treatment for Covid-19 outside of government facilities. The number of incidents rose again from September, and health workers have increasingly become the victims of indiscriminate attacks. Since the beginning of the coup, over 90% of attacks on health workers have been committed by government forces.

2. Myanmar is now one of the deadliest places on earth for health workers. In your view, why are they continuing to play such a large role in opposition to the military?

Attacks on healthcare have become a hallmark feature of the country’s coup d’état. Today, Myanmar is one of the most dangerous places in the world to be a health worker, with more reported attacks against health care in Myanmar in 2021 than in any other country. The Insecurity Insights Health Map shows clearly how dangerous the country has become. Unlike some other places, the dangers for healthcare workers in Myanmar are the result of a systematic policy of the military regime to target them.

Health workers in Myanmar are educated and skilled but choose not to go abroad to higher-paid jobs in Malaysia or Singapore out of commitment to the future of their country. Yet when the coup took place, they saw their hopes for change dashed. As frontline workers in the national health system, they see first-hand the corruption and oppression of the regime – and deal with its consequences. For this reason, health workers have led the protests against a junta which uses force to achieve its aims, and whose generals are driven by power and self-interest. Many doctors also simply want to be able to do their jobs and are frustrated by the systematic obstruction to healthcare. By providing care to the injured, they were drawn into conflict by virtue of their profession. Many health workers are thought to have quit their jobs in government facilities in protest at the coup, and are now delivering health services in secret, as part of a large underground network loyal to the democratic leadership. Providing healthcare has become an act of resistance in itself. But as a result, healthcare services are underfunded and underequipped, and the staff themselves are in constant danger.

3. Over the last 12 months we have witnessed unrest, brutality and a human rights catastrophe. We have also witnessed a strengthening of partnerships between health workers in the UK and Myanmar. In your view, what role does solidarity play in crisis?

Health workers in the UK and Myanmar and the world over have the same basic mission: to help others and save lives, even if it puts them at great personal risk. We have seen this everywhere during the Covid-19 pandemic, that health workers have sacrificed so much for the greater good. In Myanmar, in the face of these kinds of actions from the state authorities, health workers are in too many cases making the ultimate sacrifice.

Under these difficult circumstances, solidarity from the worldwide community, such as partnerships with professional bodies abroad, is an essential source of moral support. To know that their struggle is being admired by supporters and colleagues around the world can hopefully do something to balance the feelings of desperation and hopelessness that could easily take hold in the face of such extraordinary challenges.

4. How would you characterise the current state of the international response?

Attacks on health workers violate human rights and are grave breaches of international law, and the people of Myanmar are facing diminished access to all kinds of health care services. However, so far the response of the international community has been insufficient. UN Security Council Resolution 2286, adopted in May 2016, committed UN member states to take action to prevent attacks on healthcare and ensure accountability for perpetrators, but in the five years since, they have done neither. These commitments were reiterated in a Call for Action in July 2019, which has been signed by over 50 states, but all states have a responsibility to respect international humanitarian and human rights laws that guarantee respect for and the protection of health services and the wounded and sick, including the Myanmar government.

One bright note came in October, when ASEAN blocked Myanmar from participating in a summit. This led to the release of some health workers from prison, though many were rearrested soon after.

The delivery of Covid-19 vaccines to Myanmar has been inhibited by the lack of a partner on the ground to distribute them. The military’s failure to demonstrate capacity to distribute vaccines led to COVAX delaying its delivery indefinitely, but the National Unity Government (NUG), despite several attempts at engaging the WHO and COVAX for parallel vaccine procurement, was frequently blocked due to its status as an unrecognised governing body. This was a crucial mistake in health diplomacy, as the NUG could have distributed critical vaccines through cross-border mechanisms using existing networks in its “shadow health service” and in the liberated areas controlled by ethnic groups.

5. 2021 was described as the ‘hardest in living memory’ for many across Myanmar. As we welcome a new year, what more needs to be done to ensure peace returns to the country?

The UN Security Council Resolution 2286, adopted in May 2016, strongly condemns attacks on health workers in conflict situations. It is imperative that all UN member states implement this resolution in full.

UNSC Resolution 2565 demands that “all parties to armed conflicts engage immediately in a durable, extensive, and sustained humanitarian pause to facilitate the equitable, safe and unhindered delivery and distribution of Covid-19 vaccinations in areas of armed conflict”, and we join the UN Special Rapporteur on the situation of human rights in Myanmar in calling on the UN Security Council and all member states to uphold this.  International actors should support the urgent need for COVID-19 vaccines, care and broader humanitarian support to the people of Myanmar through flexible mechanisms that recognize the evolving nature of conflict dynamics and difficulty in reaching all people in need. This should include support for cross-border delivery of humanitarian aid (along borders with China, India and Thailand) to reach those in need who cannot be reached otherwise. 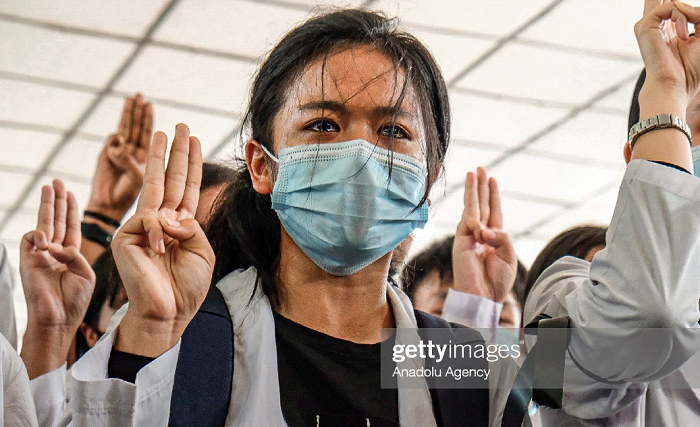 “Our Health Workers are Working in Fear”

The latest report from Physicians for Human Rights, Insecurity Insight and the Johns Hopkins Center for Public Health and Human Rights reveals the scale and impact of targeted violence against health care in Myanmar, and puts forward recommendations for action in response to the evolving nature of the conflict and difficulties reaching all people in need.