Home / Stories / Mental Health / “Don’t they throw rocks at you?” – The Brain Gain Programme in Uganda
Back to stories

“Don’t they throw rocks at you?” – The Brain Gain Programme in Uganda 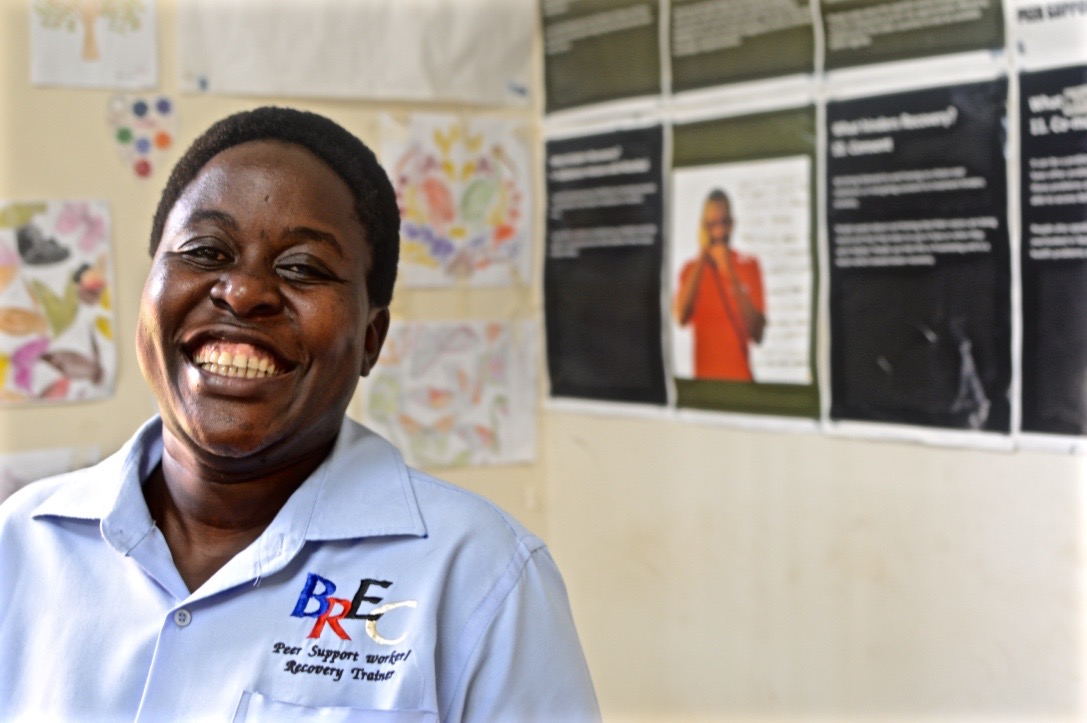 The story of Ruth, a bipolar patient and Peer Support Worker working to change the perception of mental health in Uganda.

The Brain Gain programme implemented by the health partnership between the East London NHS Foundation Trust, the Butabika Hospital (Kampala), and the Ugandan Ministry of Health began in January 2012. Three years later Brain Gain II was launched, and through the Peer Support Worker (PSW) programme, former mental health patients are treated at the Butabika Hospital and later trained to offer support to other patients affected by similar issues.

We met Ruth, a young bipolar patient and mother to her three year-old daughter, whose life has changed thanks to the programme. Ruth came to accept her condition and is now helping others fight stigma and to understand that people living with bipolarism can conduct a normal life. Here is her story.

“I was studying Law at university when I broke down. The first time I stayed at Butabika Hospital for two weeks. My dad brought me here. The center is known everywhere; everyone knows that when you have someone with a problem, you have to bring them to Butabika. But I didn’t want to take any medication and they had to hospitalize me. They gave me medicine and after two weeks I was ok and I was discharged. I went back home, took my medications, and went back to school. In 2009 I graduated.

I used to have a lot of breakdowns, sometimes I would take my medications sometimes I wouldn’t, so they had to bring me back here. For example once I wanted to sell everything I had, all my clothes… and they had to bring me back. Every time after two or three days I got well, went home, started taking my medications and then it happened all over again.

At the beginning it was very hard for me, I didn’t really want to be associated with Butabika in any way. All my friends knew I was being treated at the Hospital… the stigma around this place is what initially prevented me from wanting to be cured here. People think that everybody in this hospital is completely crazy. I told a friend of mine that I was at Butabika and he asked me:

Hey, how do you manage, don’t they throw rocks at you?

This is the kind of things people think. And so I worried about what my friends, my family and the father of my child thought about me. People openly told me things like: “You are going to Butabika, you must be mad!” At that time, I couldn’t say anything, I just went to my room and cried, asking myself why people thought I was insane. And then I came across the Brain Gain programme.

The last time I was hospitalised, Naomi, my Peer Support Worker, came to me in the ward, told me about the programme, and asked me to join. At the time, I thought I was the only one with this problem. But she told me: “I am also bipolar, but I am doing things, I look after my family. My husband has been out of a job for seven years, and I am the one who provides for my family and I have a job. You can’t give up on yourself”. That is how I learnt about the Brain Gain Peer Support Worker Group.

Acceptance was the most important thing they taught me. When I saw all the people in the recovery programme… that gave me hope. I realised that any condition can be treated with the right medications and support from others. I accepted my condition and learnt how to recognise what triggers my ‘episodes’. At that point I was ready to become a Peer Support Worker myself and help others like me.

There was this boy… when he had a breakdown his family put him on the street. He came here and was treated, but he escaped. So I went looking for him. When I found him he felt better, he was lucid and he told me he wanted to go back to the hospital. He knew that what he was going through was not good for him. With a nurse from Butabika, I went to talk to his family. I told them I was bipolar, that I was ill like him, but I recovered and was able to conduct a normal life. I told them the same could happen to him if they supported him and through the help of the hospital staff. His stepmother however thought he wanted to steal from his father and clearly stated that she didn’t want him in her home. So we brought him back to the hospital. Unfortunately he escaped again. For me it is difficult, I am trying to find a way to connect with him, he really needs help. We have an obligation, a mandate to see that people who are mentally sick become well again and reintegrate in society.

Right now I don’t have a job yet. The little money I saved from this project I used, to send my daughter to school.

Mental illness can be treated, let’s make sure that everyone with a mental health problem is brought to the hospital, takes the medications, and are taken care of. Because they can be useful in the future!