Home / Stories / NCDs / Epilepsy: Ending the Isolation
Back to stories 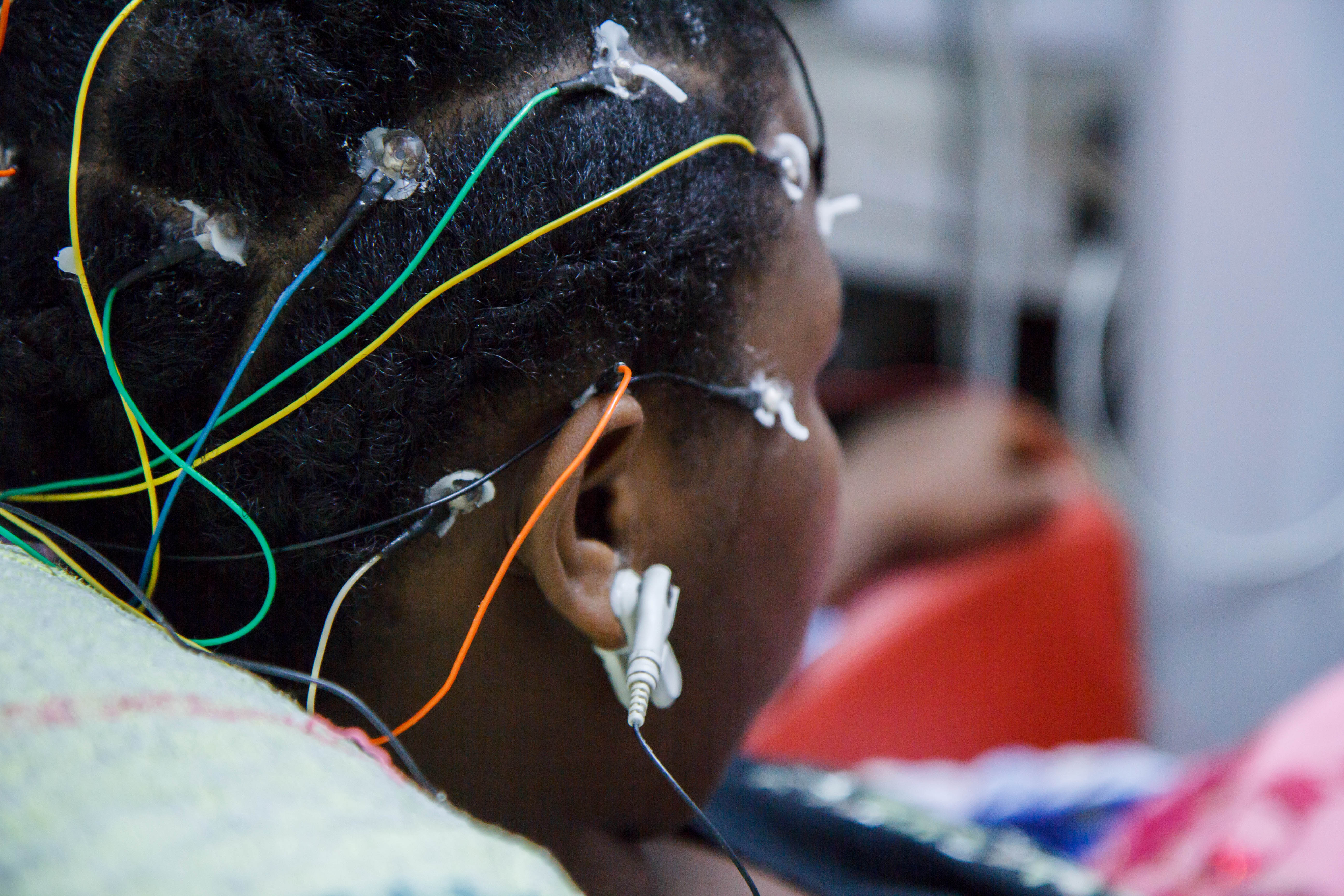 A health partnership between Basildon & Thurrock NHS Trust and Lumley Government Hospital in Sierra Leone, working closely with The Epilepsy Association of Sierra Leone, is improving epilepsy care by training healthcare workers around the country and creating an epilepsy hub to reach rural communities.

Connaught Hospital in Sierra Leone’s capital, Freetown, sits to the north of the city, not far from the Cotton Tree, a famous landmark that is over 200 years old and marks the spot of a settlement built by freed African American slaves in the late 1700s.

It’s first thing on a Thursday morning and I’ve been invited by project leader Dr. Radcliffe Lisk, a Consultant Neurologist at Basildon, to sit in on an epilepsy clinic. Patients quickly fill the room and a queue snakes out of the door. The service is obviously much needed.

The clinic starts with patients and health practitioners singing and praying then a Q&A follows. Patients asks questions about their condition and any issues they are having trouble with. For many, this is the first time they are seeking treatment for their epilepsy.

50 million people have epilepsy worldwide, but around 80% are found in developing countries. Dr. Lisk explained why:

The reason why epilepsy is more common in developing countries than it is in developed is because of additional causes such as poor obstetric practice. A lot children are born with brain damage because of prolonged labour and these are the children at risk of epilepsy in later life. And cerebral malaria has been shown to be one of the main causes of epilepsy in children. Trauma from war and high levels of road traffic accidents also contribute. Most of the prevalence studies that have been done in Africa show that epilepsy is about 2-3 times more common than it is in Europe or America so it is a big problem.

The most reliable data suggests 60,000 people in Sierra Leone have epilepsy. But inadequate health provisions and long-held views among the population that epilepsy is a result of witch craft or demonic possession means that 80-90% of people with the condition will never receive the treatment they need.

During the session I get a chance to speak with some patients who have benefitted from the project. When describing their experience of having epilepsy, patients describe similar difficulties they’ve faced such as stigma, isolation and the general belief that they are ‘crazy’. Jeneba Kabba has had epilepsy for 14 years now and described her ordeal:

They gave me kerosene to drink and said that is the way to treat epilepsy. I had this treatment for three years. People were laughing at me and saying I was crazy.

Jeneba found out about the work of the partnership three years ago and has been able to manage her epilepsy ever since. She is a mother and teacher, and works with the partnership to raise awareness and reduce the kind of stigma she faced for so long.

As well as the sessions at Connaught, the partnership is expanding its activities across the country. The project, currently funded under the health partnership scheme, is creating a national epilepsy hub to reach isolated rural communities. Previously, rural patients had to travel long distances or wait for the monthly provincial visits to access any sort of epilepsy service.  To reach the vast majority of patients, the project is training all levels of rural health worker in epilepsy diagnosis and management. Training health workers in the Peripheral Health Units (PHUs) that serve the villages and chiefdoms is a key activity for the project and essential to increasing access for patients.

To see the training first-hand, I travel to Moyamba District in the north of the country. The two hour journey takes five. Slowed down by a never-ending caravan of traffic coming out of Freetown and terrible road conditions once into the district. This helps to highlight how difficult it is for rural communities to access services in Freetown, add to this the cost, and some individuals and families have no chance of accessing healthcare.

Once at the workshop, I watch as Dr. Lisk and his team run through a full days teaching, covering everything from diagnosis, clinical treatment, and breaking down the traditional beliefs that claim epilepsy is demonic possession or witch craft.

To date, 439 health workers have received training, including 6 district medical officers, 89 Community Health Officers and 254 Community Health Nurses & Community Health Assistants. Trainees have reacted positively to the training with the majority acquiring new knowledge such as different types of epilepsy, its association with depression and recognising that the majority of seizures can be controlled with medication. Many trainees are now local focal points for the project.

Along with the training sessions, the partnership has produced a handbook that includes protocols on the management of various aspects of epilepsy. In tandem with this, the partnership continues to raise awareness about epilepsy through TV and radio appearances and newspaper articles. All essential activities in breaking down the long-held but misplaced beliefs about epilepsy in Sierra Leone.

The advocacy work is extremely important,’ states Dr. Lisk, ‘because that’s how you get them into the clinics in the first place. If you don’t change their beliefs you won’t get them to the clinics. It’s a slow process but our programme also goes into schools so we can educate the new generation. We talk about epilepsy and have our posters in schools too.

Back in Freetown, I sit in on an EEG session in the neurology department of Connaught Hospital. The EEG machine used by Dr. Lisk and his team has been acquired with funding from THET. The project has been able to purchase three machines and train four technicians to perform EEG recordings.

I ask Dr. Lisk about the sustainability of the project and he explains that the programme has worked closely with the Ministry of Health from the start to help ensure the future of the project:

One of the keys to sustainability is integration into the Ministry’s programme. That’s why, from the onset, we made sure this wasn’t a parallel programme. So by actually training the staff employed by the Ministry of Health they then have the knowledge to carry on the work after the project ends.

In fact, epilepsy has received further recognition from the government and a focal point for epilepsy in the Ministry of Health has been appointed. This is an important development for a project that is really gaining momentum and, from the amount of patients I’ve seen attend clinics, is much needed.

One thing is for sure, the partnership has already been able to produce strong advocates for the project. Over just a couple of days I’ve met health and social workers, teachers and patients who have responded positively to the training and are now advocates engaging in awareness raising and sensitization in their districts. A great example of how training and education can have life changing results far beyond the classroom.