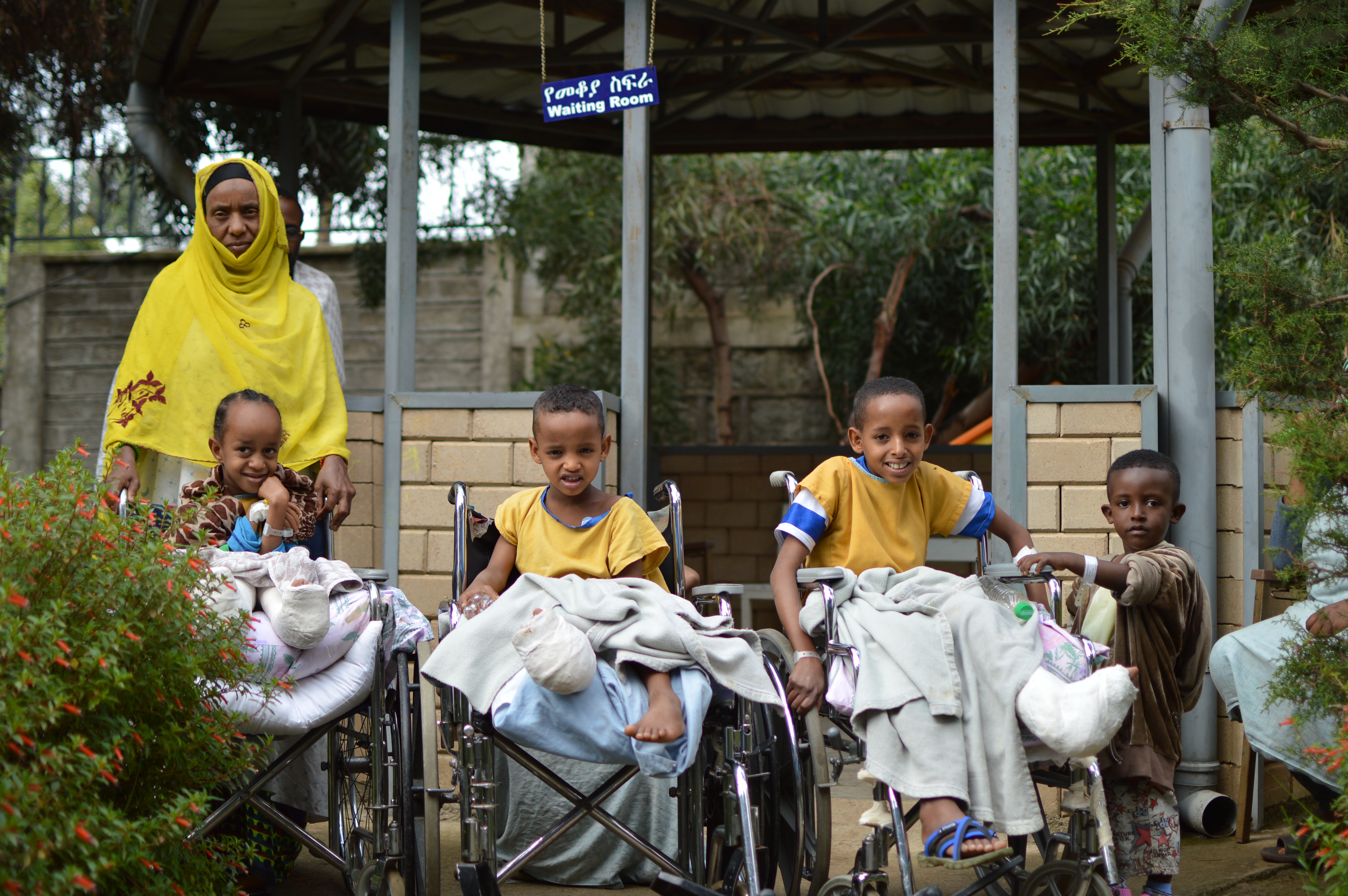 Tim Nunn is a Consultant Orthopaedic Surgeon at CURE Ethiopia, situated in Addis Ababa, Ethiopia. Charlotte, Communications Officer for THET, met him and his team in June 2017.

Here’s the account of how the training he is running through the NDORMS, University of Oxford and CURE Ethiopia Children’s Hospitals partnership – funded by THET – has enabled medical residents from across Ethiopia to take part in specialised training courses, ultimately improving both the provision and practice of paediatric and orthopaedic surgery.

It took just ten minutes to leave the bustling streets of Addis Ababa behind. The beeping of car horns, shouting of street vendors and riot of colours and smells dissipated and I found myself on a quiet downward sloping road a world away from the crush of the capital. As I passed small makeshift homes and the smiling faces of curious children tugging at their mothers to explain our presence, the sound from the city vanished and in its place came lush greenery and the quiet noises of daily life.

Having left the northern hills of Jimma just three days before, I was once again reminded that the relative riches of Addis Ababa, known as the ‘capital city of Africa’, were only a reality for the few.

I was on my way to meet Tim Nunn, a British orthopaedic surgeon devoting his life to improving paediatric care for physically disabled children. His work has seen him travel and live all over the world with his family, and we were to meet him in CURE Ethiopia Hospital in the North of Addis Ababa.

After the bare concrete and white washed exteriors of the Black Lion Hospital the day before, CURE Ethiopia came into sight resembling a colourful primary school in the UK. With bright blue gates, dashes of yellow and green and orange terracotta tiles the surrounding forest fades into the background as we enter the complex. Taken aback by the smart reception and beautiful photographs adorning the walls of just some of the children who have been treated here, I am greeted by Tim and the customary strong black Ethiopian coffee present everywhere we have been. Outside a steady stream of families continue through the Hospital gates, many of the children being carried on their parents’ backs.

There is no other paediatric orthopaedic facility in the whole of Ethiopia and yet the country faces the same orthopaedic problems the rest of the world does. I am able to see the need for such services first hand as we walk-through the hospital. Today is Friday, the day each week the hospital receives new patients from all over Ethiopia and beyond, the waiting room is full of young children and their fathers, the mothers tend to stay behind to look after the rest of the family.

Passing through the crowded room as more people stream in behind us, what strikes me though is that this is not a place of forlorn waiting, like many hospital waiting rooms I have been in, but a place of excitement for the children in particular. Many of whom have never left their homes due to their disabilities, seeing often for the first time other children with the same conditions, and it seems clear that there is an unsaid understanding that this is the start of a more mobile and freer future.

‘If we were to advertise we would be completely swamped. At the moment our patients only hear about us through word of mouth, but still our clinic currently has a waiting list of 2 to 3,000 patients. We have no ability to cover that kind of need in the country. Here and in our capacity as surgeons we provide training opportunities for local doctors to get good at children’s orthopaedics and then they can set up their own programmes in their own hospitals, and thanks to THET that’s a possibility.’

As Tim walked us to the top of the hospital, stopping to chat every few seconds to joke with the children following us in their wheelchairs in fluent Amharic (a language I am still yet to master one word of since arriving a week earlier!), or to the nurses for a quick update on a patient after surgery, it was clear that this was more than a hospital, this was a place of change and hope. Not just in the sense of the almost hourly surgeries the health workers were carrying out, or the unique training the centre provided to resident surgeons in Ethiopia and beyond, but in terms of the life-changing effects these procedures were having on the children and their families.

I met so many patients and health workers, who had benefitted from the training in different ways that the day flew by. One moment in particular stays with me. As we came down an external staircase from a ward above we were greeted by the smiling faces of four children, surrounded by a small garden, full of bright green bushes and trees and a small pagoda that sat behind them. From the happiness on their faces you could have forgotten we were in a hospital but each had a reminder of why they were there, three of the children, a girl and two brothers sat in wheelchairs with one or both of their legs in a cast and the fourth, the youngest boy grinned mischievously back at us with his arm in a cast.

Tim told us their stories.

‘These children came to us with Club foot, a common diagnosis in Ethiopia, not quite as common in the UK, it seems to be genetic but it is unknown the exact reason for such a phenomena. Alia, is six and a half and when she arrived she had very severe club feet caused by a syndrome, arthogroposis, which also affects the bones in her fingers. She had a minor surgery to begin with to release the ligaments and has since had cast changes every two weeks for the past three months. Her other foot was stuck in a pointed ‘ballet position’ but with another surgery this should be rectified.

Abdul and Sa’eed are brothers from a town called Dessi, north of Addis, admitted around the same time as Alia. They suffer from the same problem but on different feet causing them to walk on the top of the feet. This was causing them further wound problems because the pressure on the small surface is extremely high when walking on hard or stony ground in particular and only worsens when older. They are waiting for their final surgeries along with Alia next week.’

Having met just a few of the patients who had received life-changing surgeries, I sat with some of the residents and Trainers who had taken part in the training. During their formal medical training students do not receive in depth surgery or paediatric teaching and thus for many the course was the first opportunity to gain knowledge and experience from experts in the field on alternative reconstructive treatments to amputation.

‘It was an amazing experience. We don’t see a lot of tumours or congenital disabilities and when we do it is all about amputation not reconstruction. It was great learning how else we can approach these and not go straight to amputation.’ Dr Mahder Eshete – 3rd year resident

The training was also hugely valuable for the Trainers, the specialist surgeons, who because the course brought together experts from all over the world to provide their knowledge on surgery and orthopaedics, were able to learn new approaches and techniques from their colleagues, as Dr Tewodros Zerfu explains.

Eight hours after arriving at the Hospital we found ourselves back at the main gates, the steady stream of families were still arriving and the waiting room was still full of the noises of excitement and trepidation. It was clear as I walked back up the slope to the chaos of Addis Ababa that through the dedication of doctors like Tim, Biruk, Mahder and Tewodros, that a step change had begun. They were, through their passion and determination enthusing a new generation of orthopaedic surgeons, bringing children out of hiding, off their parents’ backs and providing them with the ability to walk into their own futures.