Meet the health workers who make our work possible! 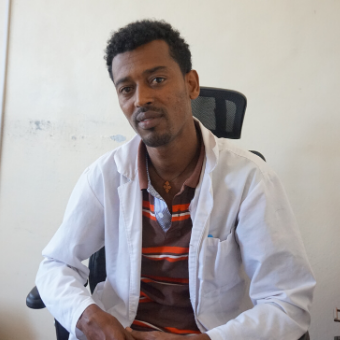 ‘I am the Curative Sub-Process Support Officer and am also the acting Medical Director at Kotebe Health Centre. This is a primary health centre; we deliver services to a catchment area of 44,600 people. There are 161 health workers at different levels, from clinical nurses to surgeons. We also provide community support at the district level in collaboration with the health extension workers. We have around 21 urban health extension workers.

I was working as a health worker for 8 years before joining this health centre two years ago, in total I have been working in the health service for 10 years. I decided to work in health because of my family, they are involved in the teaching service. My father is very engaged in education on health. I became interested in the health sector and in engaging with the community and developed an interest in maternal mortality.

On a day to day basis, I firstly undertake my responsibilities as a health officer in different departments, including emergency and OPD. After that, I am delegated as a Curative Sub-Process Officer to the in-patient department where I help to improve client outcomes by identifying the problem and solving it using a curative sub-process. My role is not only curative but related to prevention such as antenatal services. I work in between the client and the services; when a client has a problem, I help to solve it. I am happy when I can help a client.

In this community, non-communicable diseases (NCDs) are a big concern, especially in those over 40 years old. In this district, hypertension is most common. We treat both newly diagnosed patients and patients who are improving. Together, health officers and health extension workers undertake outreach to identify people with NCDs and refer them to the health centre for treatment. We also reduce the causes of hypertension and other NCDs by engaging with the community twice a week and increasing their awareness of the causes of hypertension, the causes of diabetes and others. In the last six months, awareness in the community of the symptoms of NCDs and the need to visit the health centre has improved and the health centre has become more focused on NCD clients.

Through the train the trainer approach staff in all departments, including those that aren’t focused on NCDs such as the OPD, triage and antenatal ward have become more aware of NCDs. Through the training, health officers have become more engaged and clients are satisfied. Patients are now screened for NCDs when they enter separate departments such as the OPD rather than only those who enter the NCD department and clients are satisfied with the service.

You can read more about how patients are benefiting from our NCD project in this blog from Novartis. 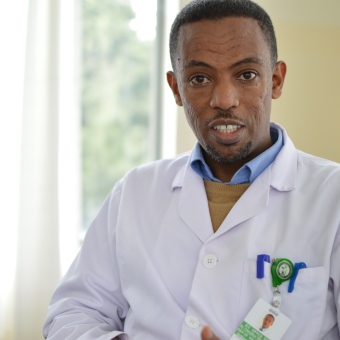 Through the partnership between NDORMS, University of Oxford and Cure Ethiopia, Tewodros undertook training to become a Trainer of Trainers. This has allowed him to provide ongoing teaching to surgery residents from across Ethiopia as part of efforts to improve paediatric orthopaedic surgery.

Orthopaedics has long been a neglected subject in Ethiopia. There are currently less than 500 orthopaedic surgeons in Ethiopia, for a population of 100 million, so we can only imagine how many trauma patients with orthopaedic problems go untreated.

After working as a GP I moved to Kenya for five years of surgical training.  Within two weeks of the training beginning I knew that surgery was what I wanted to do and in particular to specialise in orthopaedics.

It is amazing, someone comes with an injury and we operate on them, the next day he is on crutches and maybe later that day he is back home. You get immediate results.

Many of the patients we see here at CURE are suffering from congenital deformities, simple things that can be corrected, as well as from road accidents with resulting trauma.

I sometimes see very sad stories, I remember a 13-year-old boy, he had lost his father in a road accident and just six months later on the same road his family were involved in another accident.  He was the only one who survived that crash, his whole family gone. He had complicated fractures, but we are able to treat him and he is recovering really well, making friends with other children his age on the ward.

We see children as young as 5 who have never walked before.  We treat them for a couple of months, sometimes just weeks. Years later they return grown up, walking, and you don’t even recognize them.  You get a hug sometimes a kiss.

Sadly there are still a lot of case where children with congenital disabilities are associated with curses and so other children don’t play with them. Sometimes, in the worse cases, the children are locked in a room whilst their parents are at work, to protect them from stigma.

For me and my development as a Surgeon and Residency Director being able to meet with other experts in the field and to ask them about the challenges they face was invaluable.

For the trainees, the residents in Black Lion, it was a blessing, because I know how it was before.  It has made a great difference.  Before they were not very sure what to do with trauma and deformity patients and often they ended up sending the patient home, just see them come back after six months.  This is costly for the patients.  But after this training, they were sure of what to do. 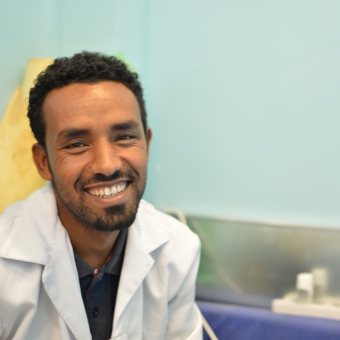 I am head of the Stroke Unit and have worked in Jimma University Hospital for three years.

Through a collaboration with THET and the University of Southampton we opened the dedicated stroke unit here. Since then we have received training including: swallowing care assistance, positioning, how to help patients take medication and evaluating patients, and this has meant that we are now able to offer daily stroke patient care.

There are 3 doctors with 3 nurses per shift and we have 8 beds for stroke patients. The beds are always occupied, often we don’t have enough beds to transfer patients from the Emergency Department, and so there are many patients who have suffered a Stroke waiting there, if the beds are free we can transfer them here but if not they stay there.

Patients come from very far away to be treated here, some patients have travelled 3000km to be here. We mainly see elderly male patients suffering from hypertension and diabetes and because this has remained untreated they then suffer a stroke. Of course the stress of a stroke further harms their health and their hypertension often worsens.

Families often stay here with the patients and we then teach them how to position and how to care for their family members both in the hospital and also when they return home.

We have many shortages in the Hospital and these have led to many patients being unable to receive the care needed. A patient that I really remember is one who sadly died because of an absence of oxygen. They needed oxygen and yet at that time not only did we not have any in the whole hospital but we also had no way of measuring the oxygen levels in the patient.

Now things have improved but I hope that in the future and we can continue to receive training to expand the services we can provide and help patients even before they have a stroke. 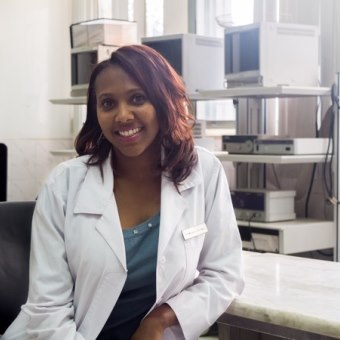 “My name is Mesale Solomon and I am a 2nd year surgical resident at Black Lion Hospital.
I received anastomosis training, which was a very interesting opportunity. Anastomosis is one of the toughest things that I expect to do as a surgeon.

There is limited equipment and resources but we have to make do with what is available. For example I have really small hands so the gloves do not fit me; we do not have different sizes, but that is my job. You have to adjust, it makes you creative.

As a surgeon you are with the patient throughout the whole process. You are there to diagnose them, treat them and care for them. You form a relationship with them which is very rewarding for me. Medicine is more than just books; you need skills so you can follow patients through the whole journey until they are cured.

I am excited for the future because I am going back to Aksum to work as a general surgeon. They are building a new hospital there and I am looking forward to working in a brand new environment. It will be good to treat patients who do not have to travel 100 kilometres to Addis to be treated. We will really be able to make a difference. I am excited to be part of a brand new organised surgical department.”